Estimated Reading Time: 10 minutes, 29 seconds. I’ve bolded the golden nuggets if you’re in a bit of a hurry. 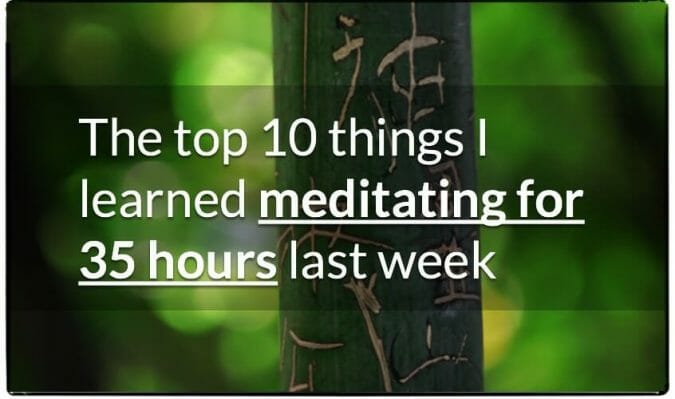 I remember it vividly.

About four years ago I was at a tea shop reading a book on meditation, when a Buddhist monk walked in and sat across the room from me. 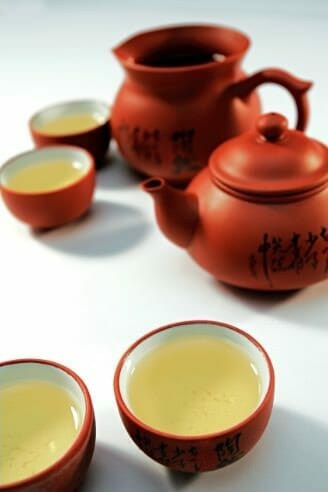 As I read, I occasionally looked up at him, and saw that he was mindfully sipping on a cup of tea. He would slowly bring the cup to his mouth, smell the tea, then drink it slowly, savoring its taste, and slowly rest his arm back down again. He drank it so slowly that it took him about an hour to finish the small cup.

I remember thinking: what a complete waste of time.

Today, I think the exact opposite.

Four years later – yesterday, in fact – I sat alone in my kitchen mindfully sipping a cup of tea. Like the monk, it took me about an hour, but I truly couldn’t imagine a better use of my time.

Meditation and mindfulness look absolutely pointless on the surface, and that’s because on the surface, they are. The real magic of meditation happens on the inside. Meditation and mindfulness completely reprogram your mind. Both practices increase the blood flow to your brain, calm you down, and allow you to better handle stress. They also make your brain younger by increasing your brain’s grey matter, and help your mind defragment its thoughts. They’ve even been shown to boost your test scores.1 Not to mention that they make you feel freaking awesome.

Over the past seven days I meditated for a whopping 35 hours, and diving deep into the practice I observed its myriad benefits first hand. Here are the top 10 things I learned about productivity meditating for 35 hours last week. 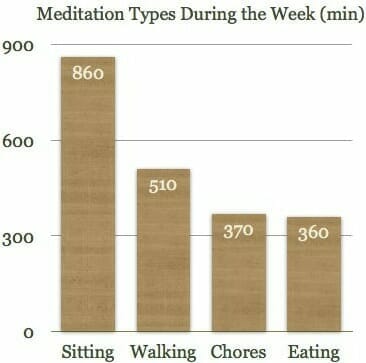 10. If you don’t want to meditate, try integrating mindfulness into your daily life.

Over the last seven days, I experimented with countless ways to integrate meditation and mindfulness into my daily life. I think a lot of people are put off by sitting meditation, because on the surface it seems foreign and complicated (even though it isn’t – I wrote a great guide to getting started here). If you don’t want to practice sitting meditation, I think you can reap most of the benefits of meditation when you actively seek out ways to integrate mindfulness into your daily life. Last week I mindfully: shaved, showered, walked, snacked, drank tea, and a lot more. In a comment on one of my posts last week, Ellen Symons also mentioned a few other great activities to bring the practice to, like during yoga, a massage, and even mowing the lawn.

Seeking  ways to integrate mindfulness into your daily life will allow you to receive the benefits of meditation, and will benefit you even more if you already meditate.

9. You can do any task that doesn’t involve thinking, mindfully. 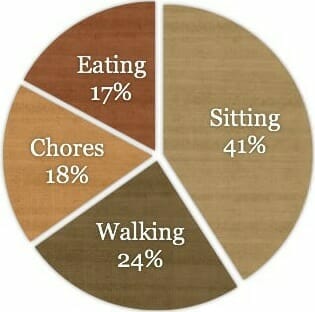 Or any other sport, for that matter. Pool is a game (sport?) that requires incredible concentration, patience, mindfulness, and focus. Most days I play a solo game of pool to mull over ideas and plan things for A Year of Productivity, and I was surprised to find myself sinking more shots than ever during this experiment.

A lot of people consider sports to be 90% mental and 10% physical, and I’m confident think if you actively play sports, meditation will help you perform. It’s no surprise that athletes like Kobe Bryant, LeBron James, Tiger Woods, Michael Jordan, Derek Jeter, and many others all have a meditation ritual.2

A computer’s RAM is like it’s short-term memory. By having a singular focus during meditation, you clear your mind of thought, which not only works out your ‘attention muscle’, but also clears your brain’s RAM.

This by itself is a good enough reason to practice meditation. Clearing your brain’s RAM reduces your stress and allows you to focus better throughout the day.

6. Meditation lets you work smarter, instead of just harder.

During the experiment, I made sure to work as much as I could so I had a way to measure how meditation affected my productivity.

Interestingly, I found that meditation made it much easier for me to identify the highest leverage activities in both my work and personal lives, which made it possible for me to work smarter, instead of just harder.

Integrating meditation and mindfulness into your everyday life is simple. Mindfulness involves slowing down, and giving an activity your complete focus. Find an activity that does’t require a ton of thinking, and then slow way down and pay special attention to the actions your body and mind want to perform naturally. Boom! You’re now practicing mindfulness. 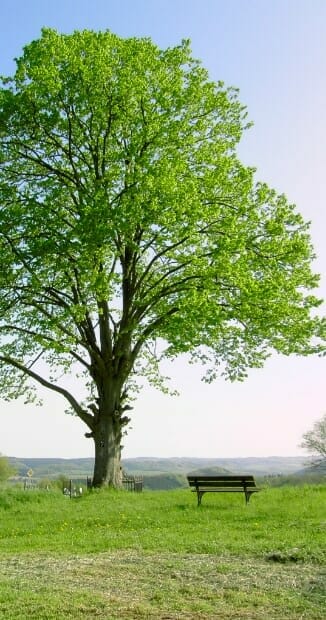 5. The bigger something is, the easier it is to put off.

When I started the experiment, I made an effort to group my daily meditation time into one big chunk so I could tackle it all at once, but I frequently found myself procrastinating because I made such a big commitment to myself.

When I broke down my meditation time down into a few smaller, easier-to-manage chunks, I procrastinated much less, and got a lot more done.

Breaking other activities down into smaller, easier-to-digest chunks helps a ton with procrastination. If you’re studying, schedule time to just study one chapter instead of five. Similarly, the idea of cleaning up your basement may seem daunting (especially if it’s going to take you a day or two), but cleaning your basement for only 10 minutes is much more manageable. It’s a much smaller chunk of time, but you’ll actually do it. And, when you get started, you’ll likely want to keep going!

4. You enjoy food twice as much when you eat it twice as slow.

If you’re anything like me, when you eat something good, you want to eat it all right away, now! Fast! But that’s a bit backwards. When you really look at the amount of enjoyment you receive from eating something, you realize that you receive pretty much twice the enjoyment from eating it twice as slow.


When I took the time to mindfully eat food during the experiment, that food was the tastiest food I’ve had in years, not only because I mindfully focused on the food’s flavor and texture, but also because I slowed down to actually enjoy and taste what I was eating.

If you want to get more enjoyment out of your food, eat slower. Better yet, practice eating mindfully. The practice will also help you eat less because you won’t lose track of how much you eat, and because your mind has more time to register that it’s full.3

By the way, if you want to learn to meditate, I wrote a killer meditation guide here.

3. Meditation turns you into a more compassionate and patient person.

When I was writing the first draft of this article, I was sitting next to my girlfriend and she added to the end of the title for this section, “and a better, more patient boyfriend!” Last week I found myself becoming more caring, patient, and compassionate as the week went on. I helped out with things I didn’t before, cleaned up when I didn’t have to, did favors for strangers just because I could, and found myself listening to the people around me much more attentively.

Patience is a quality I work hard to cultivate in myself, especially when it comes to dealing with people. Meditating for 35 hours helped me become more considerate, compassionate, caring, and patient than I have been in a long time. 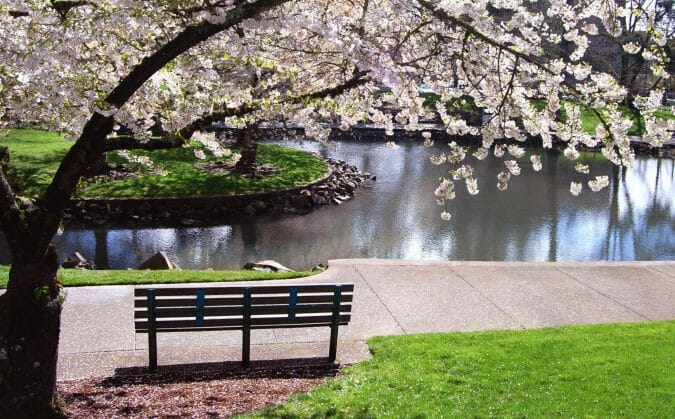 2. Never wish away time. You have a set amount of it, and you don’t get more. 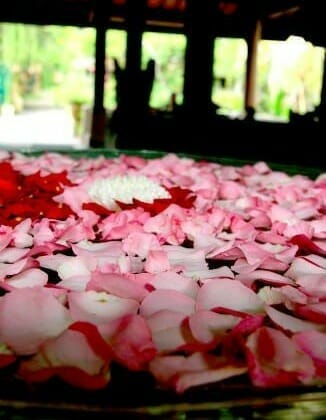 1. Your actions are your only true belongings.

But here’s the thing: the past has already happened, and the future is just an idea of what you think things are going to be like (and if you’re anything like me, you’re wrong 75% of the time). The actions that you perform in any given moment shape your future, and create your past. The present is the only time that ever actually exists.

There’s a Buddhist parable that says that your actions are your only true belongings, and that they’re the ground upon which you stand. I lived that parable last week, and can say now that I can’t think of a sentiment more true. Meditation trains you to focus on the present moment, and maybe even more importantly, teaches you that you never have to (or can) deal with more than one moment at a time.

0. A quick walk through the forest 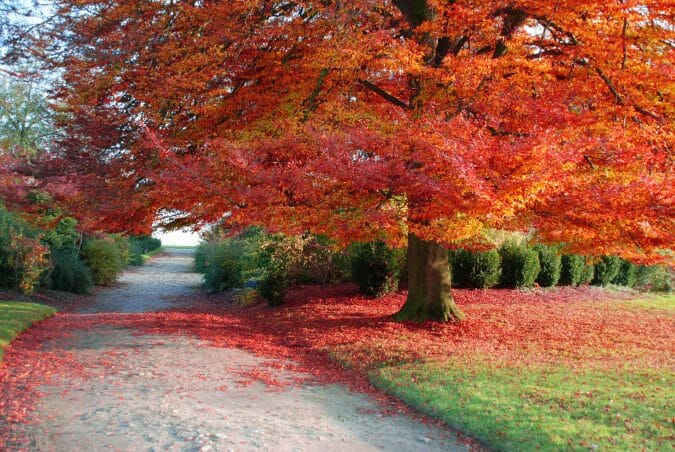 Imagine you’re walking through the picture above. 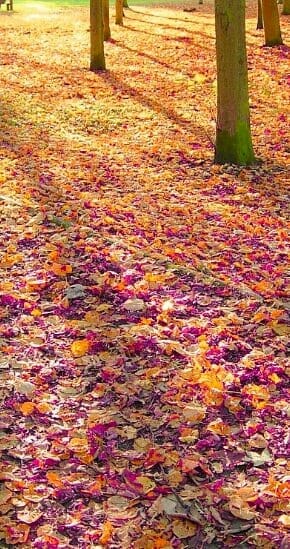 It’s a gorgeous autumn day; not too hot or cold, and there’s a light breeze ruffling the leaves as you walk by them. You get lost in how the branches are moving, how the day is so perfect and calm, and gaze up in awe about how beautiful your life is.

Now imagine that instead of walking along the trail, you’re driving down it. You pass the exact same trees – whooooosh – but they mean a lot less to you. There’s no depth to them. Sure, you might take a second and think about how nice they are, but even if you did, you definitely wouldn’t hear the wind rustling the leaves, or notice the Rainbow Lorikeet perched on one of the branches.

You might not even notice the trees at all.

A lot of people have a go, go, go, faster, faster, faster view of their work. They want to do more, in less time, and get from point A to B as fast as possible. And a lot of the articles on this site are about just that.

Productivity is completely meaningless if you don’t reflect on how it makes your life better and more meaningful. It might seem strange that sitting on your butt and doing almost nothing can make you more productive, but I personally can’t think of an activity that will bring as much perspective and meaning to your life as meditation.4

Meditation, unlike a fast drive through the picture above, is slow, calm, and deliberate. It brings meaning to what you do, helps you discover who you are, and in my opinion, it’s one of the best gifts you could give yourself.

If you don’t already practice meditation, I highly recommend it.