Estimated Reading Time: 7 minutes, 52s. I’ve bolded the golden nuggets if you don’t have that long. 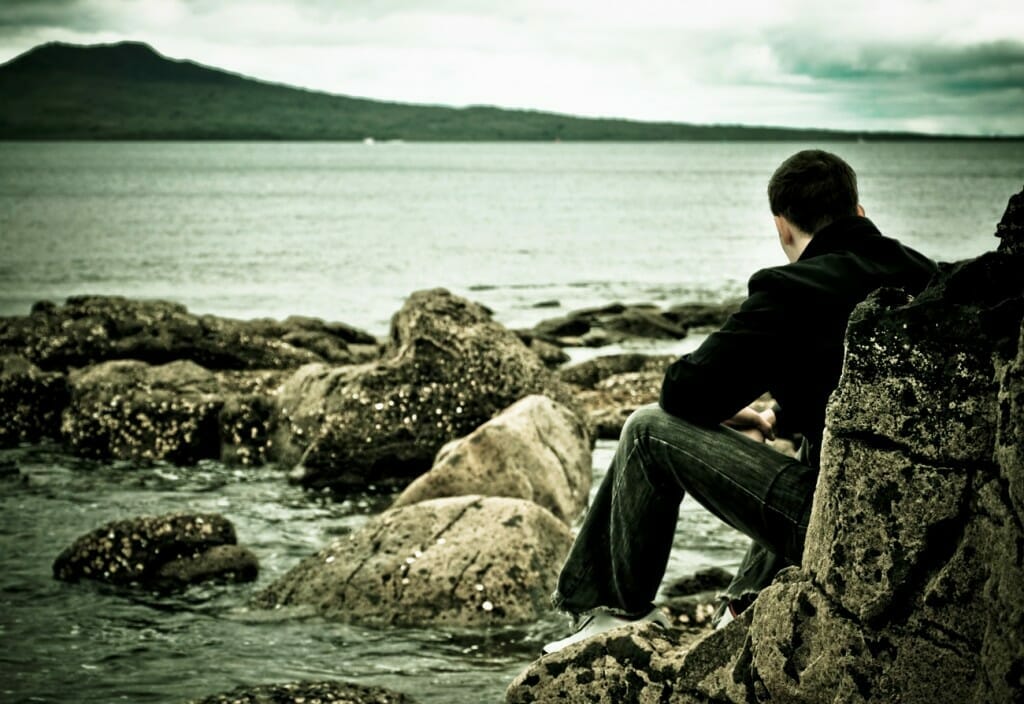 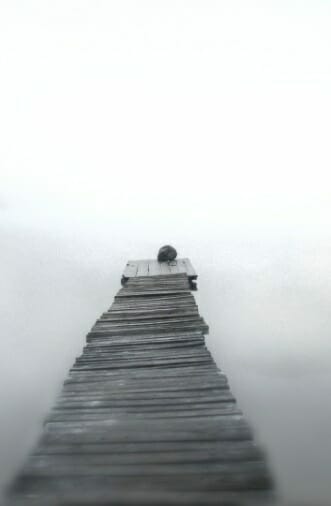 I almost quit this productivity experiment on Day Five.

And at the same time, I loved this experiment. I loved living on an island, a cocooned paradise where no one could contact me or reach me. I felt unburdened by the commitments that come with people. All of my time was mine – I wasn’t being tugged in a million directions – I could move freely, productive or otherwise, in whatever hell direction I wanted.

You could say that this experiment had its ups and downs.

The purpose of living in reclusion was to dive deep into how social interactions impact productivity, and I certainly did that. At 5pm today I’m stepping out of my cocoon and back into the real world, but not before writing about the things I’ve learned down here. Here are the top 10 things I learned about productivity while living in reclusion for 10 days.

I think almost everyone has tweets, emails, text messages, pictures, and other online stuff they’d like to take back, and can’t.

On my computer’s desktop I have a big ass text file with a ton of emails, tweets, and blog comments that I wasn’t allowed to send during the course of this experiment. Here’s the interesting part: as the file has been sitting there for the last 10 days, I have significantly revised the more important messages in the batch, and sometimes completely changed some after I would have already hit ‘Send’. Most of my edits took place in the 24 hours after I wrote the original message.

When you give your mind time to collect and form thoughts, what you say is more complete, valuable, creative, and generally, better. Before hitting ‘Send’ on your next important email, try waiting several hours, or even a day if you can. The world certainly won’t fall apart, and you’ll be able to get your point across much stronger. 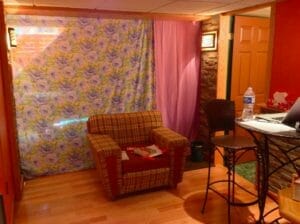 My main living quarters for the week (plus a futon, not pictured). Click for a larger image.

The room I lived in for the last 10 days is tiny, and mandarin oranges give me a lot of gas. Needless to say, this is a lesson you should take to heart if you ever find yourself spending time in reclusion.

8. It’s easier to ‘let yourself go’ when there aren’t people around

Toward the end of the experiment, especially as I began to write more and make less videos about the experiment, I began to care a lot less about my appearance. I dressed sloppier, ate poorer, and didn’t care a hell of a lot about impressing people (and not in a badass kind of way, either).

I’ll personally admit that one of the reasons I want to become fitter, more focused, smarter, and so on is vanity. It isn’t the only reason, but it’s one of them. I want people to look at me and think, “holy shit, is that man ever    blank   !” Without people around to impress, I found myself letting go of my appearance.

I’m not sure if this lesson can be generalized, but I’m going to do it anyway. When you’re surrounded by more people, especially if receiving validation motivates you, you will try harder to make yourself into a better person. 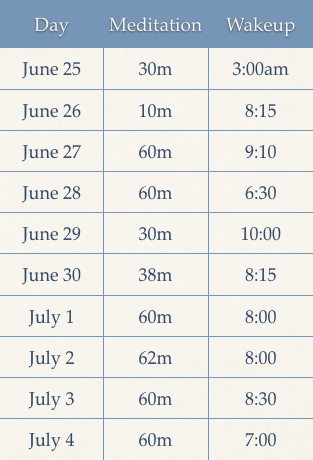 7. Meditation is the key to staying sane

Over the last ten days, I’ve meditated for 47 minutes a day on average, and this has undoubtedly kept me sane in reclusion. At the beginning of my experiment, I found my mind racing and restless, but after each meditation, my mind revved down considerably. Meditation may just be the key to keeping your mind calm and in check.

As the old Buddhist saying goes, “you should sit in meditation for twenty minutes every day – unless you’re too busy; then you should sit for an hour.”1

The problem is, and maybe you’re like me with this, I invest way more time into my digital connections than my real connections. That’s not to say that there isn’t a human being on the other end of every twitter account (except for Horse ebooks, of course), but that is to say real relationships will provide you with much larger returns. The trick is to spend your time in a way that matches up with that fact.

5. The most boring, cliche things are the things that actually work

I think that behind every cliche is a truth that’s so powerful that people feel compelled to repeat the phrase over and over and over. Work out. Get a good amount of sleep. Eat well. Take a vitamin every day. Drink a lot of water. The problem is that they’re repeated so often that they lose almost all of their meaning.

By day three, I was sick, stuffed up, had trouble breathing, and generally felt terrible. But then I started drinking a ton of water, taking vitamins, eating impeccably, and began to focus more on getting a good amount of sleep each night instead of trying to wake up at 5:30 every morning (for another productivity experiment). As soon as I started doing these boring, cliche things, my health, attitude, motivation, and energy levels all instantly perked up. These things work. 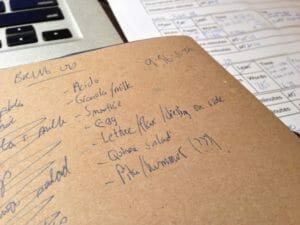 Every day I was allowed two, 10-minute trips upstairs, and throughout each day I made a list of what to get.

4. Without people around, you have high highs, but lower lows

Two news articles were published about my project while I was in reclusion, and to be honest, this made me feel just as good down here alone as I would have felt surrounded by friends.

But when I hit the ‘lows’ of this experiment – taking three hours to fall asleep, battling a huge cold, getting fatigued because of a lack of sleep, and becoming sadder than I had been in months – I had no social support network down here as a safety net.

I think a lot of people think they don’t need people when they’re on top of the world, only to find they’re alone when they inevitably come back down again.

As a rule, I think people embellish pretty much everything. 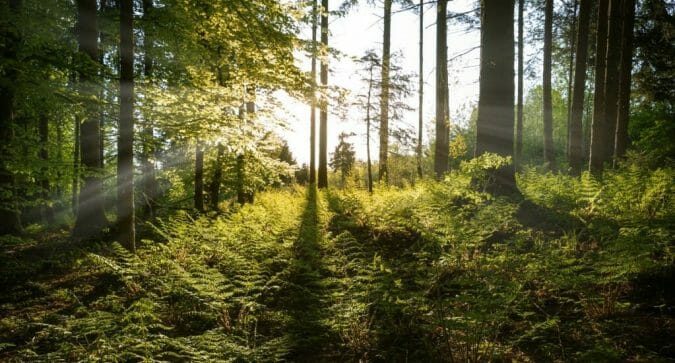 3. Sunlight elevates your mood, regulates your sleep, and gives you energy and motivation

This was a lesson so big that I wrote a whole other article about it. When you don’t have enough exposure to sunlight (like me throughout the experiment), your sleep quality severely suffers (since the sun regulates your sleep cycle), you’re less able to handle stress and manage your attention, and you have significantly less energy. 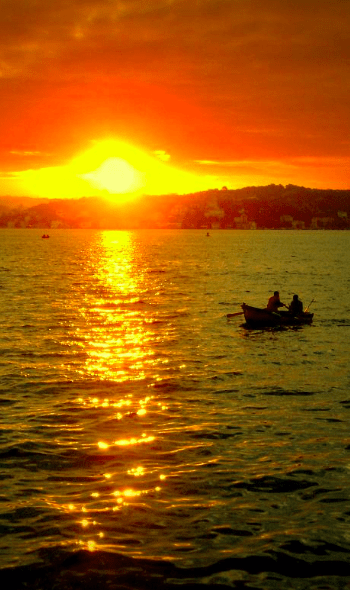 2. Stepping back from what you do gives you a valuable, bigger perspective

We spend most of our time at ‘ground level‘, entrenched in whatever we’re doing. It isn’t until we step back from what we’re doing that we can see it from a broader perspective. Living in reclusion, I focused mostly on work, and I found it incredibly difficult to step back from this project. But at the same time, I was about to gain an incredible perspective on where things like my relationships, finances, and health fit into who I am, mostly because I was able to step back from those elements of my life. Stepping back from the elements that comprise your life gives them meaning, gives you purpose, and allows you to see how what you do fits into the bigger picture of who you are.

1. People matter (more than you think)

At the end of the day (well, 10 days), I was less productive in reclusion than I would have been normally. Everyone has a different definition of productivity, but most of the benchmarks I use to measure how productive I am involve people, such as how happy I make other people, and the difference I’m able to make. When you take people out of that equation, either a), you’re not able to accomplish much, or b), what you do accomplish doesn’t mean a hell of a lot.

For me, people are my tapestry; so interwoven with who I am and what I do that I take them for granted. But over the last 10 days, like electricity, I’ve missed all of the people in my life when they were gone.

Throughout this experiment I have been less motivated, energetic, enthusiastic, and happy than I have been for a long time. Sure, some of that is because I’m not getting any sunlight, but I think it’s mostly because I have had no social interactions for the last ten days.

People matter, perhaps a lot more than you think. This isn’t an experiment I’ll repeat, but that said, I sure as hell learned a lot.

The next experiment I’m going to be diving deep into is reducing my body fat percentage to 10% (from 17%), and gaining 10 pounds of lean muscle mass. I’ll be posting periodic updates to that experiment on the front page of A Year of Productivity. Thanks for reading!