Is more conflict the key to becoming more productive?

The Bottom Line: If you have trouble getting out of bed in the morning, find yourself procrastinating a lot, or feel overwhelmed or discouraged, it’s helpful to be mindful of the amount of stress in your life.

If you’re anything like me, you love TED talks and productivity. So when I was stumbling around on TED.com and found Margaret Heffernan’s talk about productivity, my brain almost ate itself.

In a nut, Heffernan is a successful businesswoman who has been the CEO at five large companies, and she has also written books about leadership, women in business, and entrepreneurship. In her great 13-minute talk, she makes the case that we should seek out conflict instead of pushing it away, because conflict makes us much more productive. And, if we happen to run a company or lead a team, we should also create an environment where people see constructive conflict as a good thing.

For whatever reason, people have a natural tendency to shy away from conflict. But to see how essential conflict is to becoming more productive, you don’t have to look much further than stress. Like conflict, people have the tendency to shy away from stress (essentially internal conflict), but stress is essential to becoming more productive. When you have to go to work in the morning, like it or not, you get out to bed, early. Stress (both good and bad) is also what often propels you through each day. 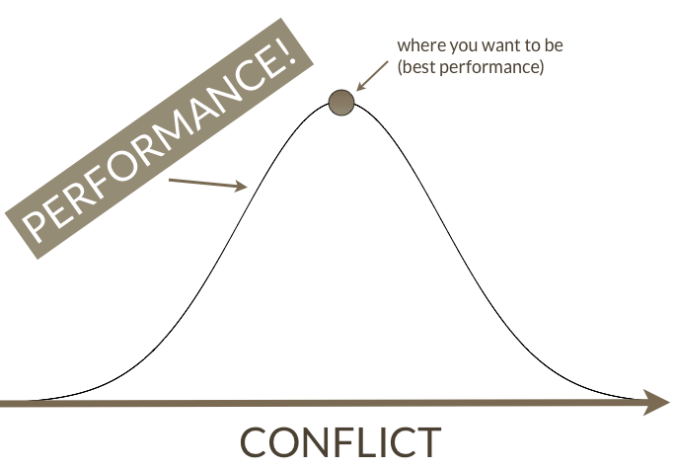 Margaret’s talk harps on a point that has been drummed into me constantly over the last five years at business school – that there is an optimal level of conflict and stress that makes an organization or person the most productive. Anything less than that amount will lead a person to laziness and procrastination, and any amount higher than that will lead a person to feel overwhelmed and discouraged.

It’s a concept that’s incredibly simple in theory, but like most theories, it’s much more complicated in practice. I don’t really have a good answer for how to strike a balance between low- and high-stress things, but I think it is definitely a concept that’s worth being mindful of. If you have trouble getting out of bed in the morning, find yourself procrastinating a lot, or feel overwhelmed or discouraged, I’ve found that it’s helpful to be mindful of the amount of stress in your life. It might be time to introduce or remove an element or two of your life to perform better.