How to Stay Productive When Everything Goes to $&@%#

Takeaway: A few weeks ago, I broke my ankle traveling overseas. For a couple of weeks my productivity was shot, but what worked better than anything else to get me back on my feet was setting intentions for what I accomplished every day, meditating, and training my brain to think more positively—by recalling three things I’m grateful for every day, reliving a positive experience at the end of the day, and exercising. 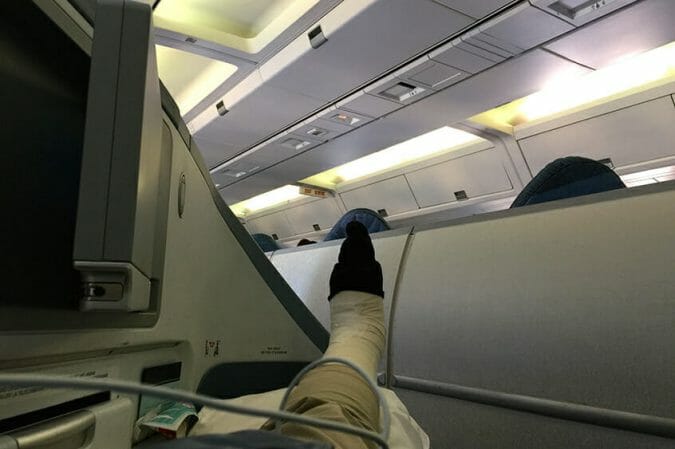 The beautiful thing about studying productivity is that I am always learning. This felt especially true when, a couple of weeks ago, everything went to $&@%#”.

A couple of weeks ago, I took a trip to Dublin. With my new book in the works,1 my intention was to take a week to create some mind space; to relax in the countryside and let interesting and new thoughts percolate to the surface while hunkering down on the project.

One evening, while hiking back to the Airbnb I was staying at, I tripped on a cobblestone sidewalk and broke my ankle. It was late at night and I was stranded there for about three hours, alone; my cell phone battery was dead and I couldn’t stand, let alone walk back home.

After lying down for what felt like an eternity, some passersby’s heard my calls for help and came to my rescue. What followed was the exact opposite of what I expected from my trip: a stay in a foreign hospital, stressful discussions about whether or not I was covered for insurance, and restricted travel mandates from the doctor. Thankfully, all ended as well as could be expected: after three nights in the hospital, my insurance covered the care I needed and I was able to make it home on a fancy First Class ticket—after some reconstructive surgery on my ankle, of course.

A few weeks after the break, I’m beginning to feel much better, and have way more mental and physical energy in the tank to get stuff done every day. But in the middle of my injury, I discovered three tools that helped me more than anything to get back on my feet and become productive again: working with intention, meditating, and training my brain to think more positive.

I think creating intentions, even small ones, is key to productivity.

achieving what you intend to accomplish

It was a struggle to feel productive while I was lying in a hospital bed, in a foreign country, with all kinds of uncertainty swirling around me. To manage during this time, my first instinct was to create the simple, small intention of walking around the hospital ward for at least two to three minutes each day. The completion of these little jaunts did wonders for boosting my mood, mainly because I felt great about accomplishing what I intended to—which is what productivity is all about.

This idea harkens back to a practice called The Rule of 3 that I started doing early in my A Year of Productivity project. With the practice, every morning you simply write down the three things you want to accomplish by the end of the day, and you do the same every week. Over time, I’ve found that the ritual isn’t only powerful because it helps you step back and think about what to be productive on—it’s also powerful because it helps you work more intentionally every day and week.

After breaking my ankle, my intentions were necessarily smaller because I had less energy to do them with, but after the first few days I began to feel great once I could accomplish what I intended to every day and week.

Injured or not, working intentionally is one of the best things you can do for your productivity. 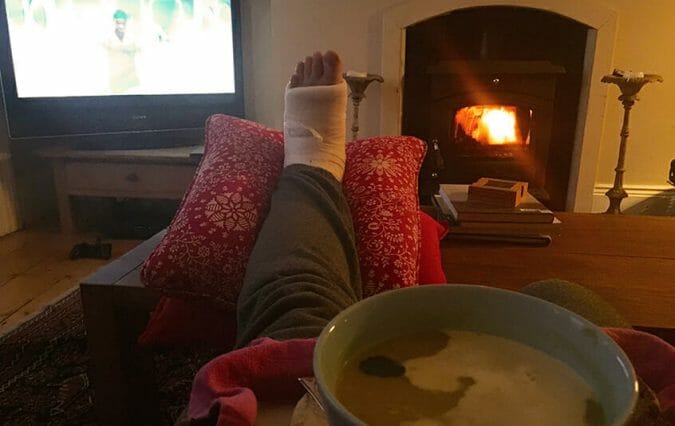 Huge props to my Airbnb hosts and my buddy Harry Guinness for taking care of me after my injury. The people in Ireland are incredible.

If you are a regular reader you may know that I love to meditate; not in a hippie-dippy, spiritual way but in a way that helps me focus my attention on what I’m doing in the moment. Meditation has become my best friend during my recovery.

As with any hardship, the stresses of my injury and the events surrounding it left my brain overwhelmed, swamped, and somewhat defeated. Meditation has worked better than anything else I’ve found to clear away that brush and react more positively to the unexpected.

I think productivity is more of an art than a science, partly because it’s impossible to predict the future and the positive and negative events that it will bring. But when the unexpected does happen, and you’re not able to accomplish what you had intended to, meditation will help you more than anything to help you get back on your feet.

And if you’re already feeling great, it will help you that much more. 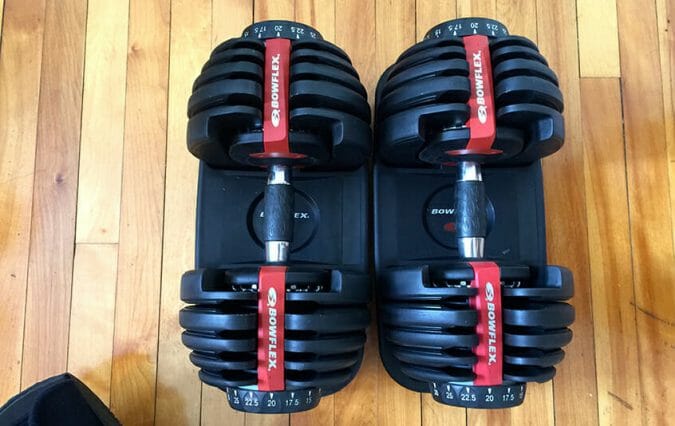 I can’t hit the gym while I recovery, so I picked up these babies. Highly recommended, though they’ll set you back a bit!

As corny as “positive thinking” sounds on the surface, training your brain to think more positive is one of the best things you can do for your productivity. As Shawn Achor explained in his brilliant TED talk, research shows that “your brain in a positive state is 31% more productive than your brain in a negative, neutral or stressed state.” Simply put, happier brains are more productive.

A practice I’ve had for a year or two has been to recall three things I’m grateful for at the end of every day; a tactic I first came across in Shawn’s book, The Happiness Advantage. It’s a simple tactic, but Shawn’s research has shown that over time, the gratefulness ritual rewires and trains your brain to be happier and more productive. He has found the same to be true for recalling a positive experience at the end of every day, exercising, and meditating—all things I’ve done every day since my injury.

I have no idea where my head would be at today if I didn’t do these things daily.

Unexpected hardships come in many forms—whether they’re physical, emotional or financial—and while it’s pretty much impossible to stop the unexpected from happening (that’s what makes it unexpected!), it is possible to deal with the things that come up productively.

Living and working with intentionally, meditating, and training your brain to think more positive are the best tools I’ve found for the job.