If you own an iPhone or iPad, download iOS 9.3 and enable “Night Shift” right away

Takeaway: If you own an iPhone or iPad, download the iOS 9.3 software update, and after you do, enable the Night Shift feature. The feature reduces how much blue light—a type of light on the blue end of the wavelength spectrum—your device emits, which, believe it or not, will help you sleep better. 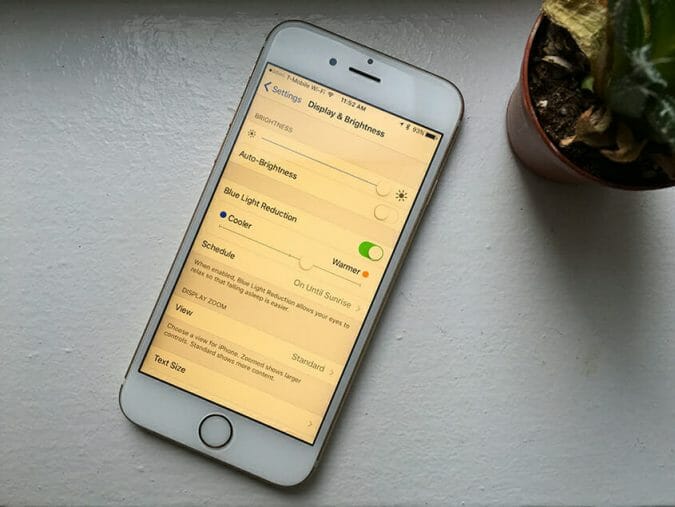 One of my favorite apps for the Mac and PC is F.lux—a free app that changes the color temperature of your computer monitor at night to help you sleep better. If you think this sounds like total B.S., believe me, once you try it you’ll absolutely notice a difference in practice. The research backs this up: blue light tells your body not produce melatonin, a chemical that regulates your circadian rhythmic and tells you when it’s time to sleep. This is why it’s harder to fall asleep when you stare at your devices that emit blue light right before bed.

While f.lux works for the Mac and PC, and apps like Twilight exist for Android, until now there were no similar apps for iPhones and iPads. That changed today, with Apple’s iOS 9.3 update. It includes a new feature named Night Shift, which according to Apple, “shifts the colors in your display to the warmer end of the spectrum, making it easier on your eyes.” This helps you sleep better, with the only cost being that your screen looks a little less blue (like in the picture above).

Sleep is essential for productivity—I see it as a relatively easy way of exchanging time for energy. And the exchange rate is pretty damn good. But when so many things—caffeine, alcohol, and blue light included—can interfere with a good night’s rest, your sleep is worth defending.

If you have any Apple devices that run iOS, downloading today’s update and enabling Night Shift is a no-brainer.