Takeaway: The Soylent 2.0 formula comes in premixed plastic bottles instead of as a powder, tastes much better than the old version, and is more convenient. It’s worth keeping some bottles of it in your fridge. 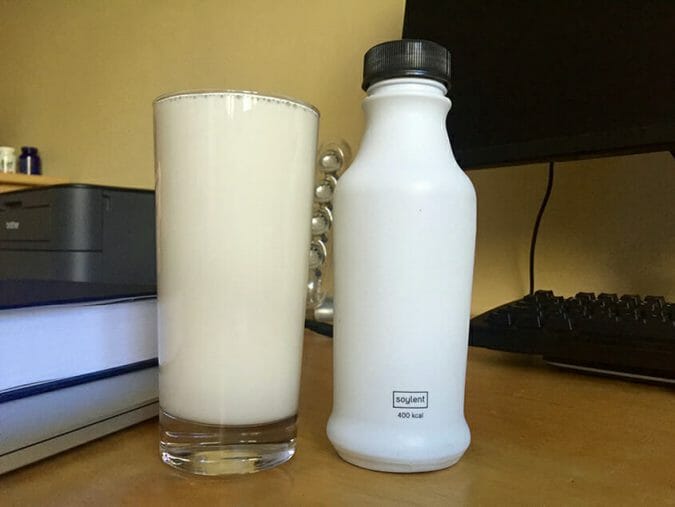 I recently spoke at a private conference, and for fun, arranged to serve everyone in attendance a glass of Soylent. Soylent is a powdered food substitute that contains everything your body nutritionally needs over the course of the day—carbs, protein, fats, vitamins, minerals, etc.

Here’s a productivity experiment I conducted a while back to drink only Soylent for a week.

I was curious what people would think. Sure enough, out of the 60 people in attendance, only a handful finished their glass. Most couldn’t stand how it tasted.

What I disliked the most about the old Soylent powder was also the taste: the old formula tasted like thick oat water—though not entirely in a bad way. I found it okay at first, but it grew old pretty quickly.

Recently, though, I decided to order a few cases of Soylent’s newest formula: Soylent 2.0 (which came out last September). This formulation varies from the previous one in a few ways:

The two formulations are quite different when it comes to preparation. It used to take an extra step to mix the powder with water; now, you just twist the top off a bottle and knock it back. The bottles are premixed, so it’s convenient to keep a few in your fridge for when you need them, and you can store unrefridgerated bottles for about a year.

Over the last couple months, I’ve maintained a steady stock of bottles in my fridge, for when I’ve wanted to have a quick and healthy meal. I would never want to consume Soylent 100% of the time, but I’ve found myself cracking open two or three bottles a week, especially:

Because Soylent 2.0 is cheap, healthy, and convenient, I highly recommend picking up a case or two. You probably don’t want to consume Soylent for every meal, but the stuff is a godsend for when you want to eat relatively healthy, but don’t necessarily have the time, energy, or inclination to make something.