The powerful saving principle that will let you retire decades earlier

Takeaway: This article is long, but it’s worth your time. It’s about the ‘early retirement crowd’, and exactly how they’re retiring so early (like at 30). They save a much higher proportion of their income because they prioritize working less and retiring earlier over living a fancier life. 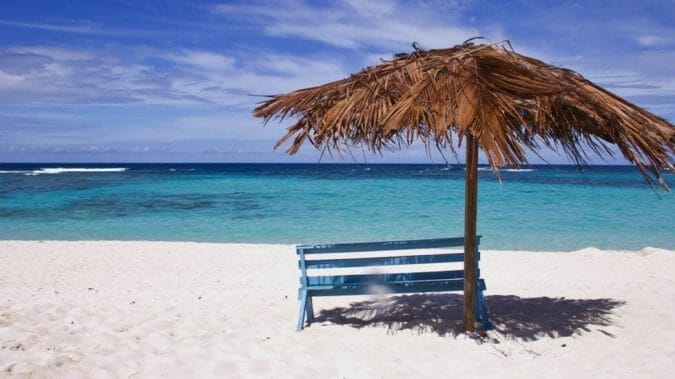 You could be unwittingly selling off decades of your life without knowing it.

In Canada, there seem to be a few social norms when it comes to retirement:

I recently discovered a movement of people online (mostly middle-class people, too) who are retiring decades earlier, and are turning all three of these norms on their heads. They’re unusual, but in a very incredible way. Mr. and Mrs. Money Mustache retired at 30. Jacob Lund Fisker also retired at 30. Others are on pace to retire at 35, and others at 40.

The principle they live by 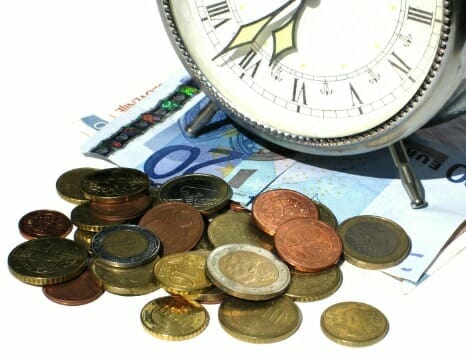 A lot of people look around to other people to decide what to buy, wear, drive, and live in. That’s a pretty natural and effortless way to live, but it also costs a shitload of money.

Here is the principle the ‘early retirement crowd’ lives by. It’s probably easiest to illustrate it with an example.

If you put 50% of each paycheck into retirement, that means that you are living simpler, and that you’re able to maintain a simpler lifestyle that costs $25,000 per year. When you put 10% of each paycheck into retirement, you are living a much more extravagant lifestyle that costs $45,000 per year. This is another place this effect works so well – since you have already adapted to living a less lavish lifestyle, it will take you even less time to retire, because you need less money to live off of; 44% less in this example.

“The key to success is to run your personal finances much like a business, thinking about assets and inventory and focusing on efficiency and value for money. Not just any business but a business that’s flexible, agile, and adaptable”, says Jacob Lund Fisker of Early Retirement Extreme.3 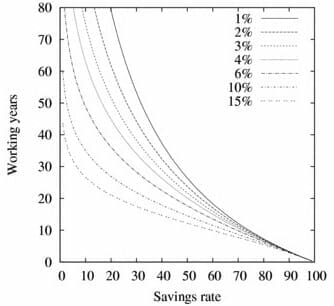 I borrowed the graph on the right from Mr. Money Mustache’s blog that illustrates this profound effect. On the left axis is the total number of years you will have to work until you retire, and on the bottom is the percentage of your income that you save.

Living extravagantly is fun, of course, but folks in the ‘early retirement crowd’ prioritize shaving decades off of their retirement higher than living a lavish lifestyle and working for most of their life.

These calculations also assume that you won’t make a single penny extra after you retire.

The magical thing that happens when you cut out expenses

The principle becomes even more exciting when you start cutting out needless expenses. Here are two examples on the opposite ends of the money spectrum: a latte, and a new car.

Imagine you buy a $4 latte five times a week, and you instead decide to brew coffee at home to save money. This change has two effects, one obvious and another not as obvious. First, it has the natural effect of saving you money. Every year, you can put $1,040 of extra moolah right into your retirement fund, and then earn interest on it. 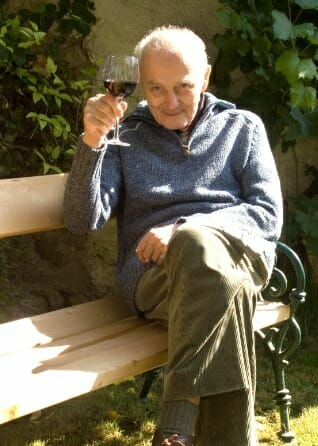 It’s possible to be younger than this dude when you retire.

The second effect is more interesting. Since you reduced your yearly expenses by $1,040, not only can you set that money aside for retirement, you have also effectively reduced your cost of living by $1,040 per year, reducing the amount of money you will need to live off of after you retire. So not only can you invest that money, but you will also need $1,040 less every year for the rest of your life because you no longer buy lattes.

What about a new car? The average person spends $29,217 on a new car.4 If you’re able to live off of $30,000 per year, investing that $30,000 you would have poured into a new car into your retirement will let you retire a full year sooner. And of course, that assumes you don’t get interest on that amount. If your investment returns 6% interest, at the end of only 20 years, that same amount will be worth $99,306. In other words, you would have to work 3.3 years longer because you bought that car.

In this example, cutting out your daily latte and a new car means you can retire 6.2 years sooner.

Over the last two years I’ve drastically cut my expenses. Last year I spend $15,200, and this year I’m on pace to spend only $7,200, though I’m not paying rent for the year.5 Cutting out expenses has afforded me other benefits, too: after graduating University after five years of business school, I have saved about $14,000 (though I have about the same amount in loans), all while living away from home.6

Removing expenditures has given me an incredible amount of freedom, and it’s also allowed me to experiment with how spending money affects happiness. I’ve found that so far, there isn’t much of a correlation. I think Seth Godin put it very well when he said that “[w]ithin very wide bands, more money doesn’t make people happier. Learning how to think about money, though, usually does.”7 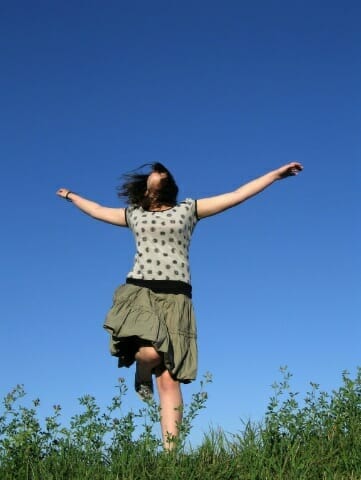 Yes, Dear Reader, you too can retire and then frolic in a field just like the lady pictured above!

If your goal is happiness, to be as happy as you are, you likely don’t to spend as much as you currently do.

People like the idea of “more”, because having more of something usually makes us better. If we’re skinnier, we’re seen as better looking. If we have a bigger house, we might be seen as more impressive. If we have a nicer car, we can be seen as cooler. But when we spend more money, that costs us very valuable time and freedom later on. Besides, people likely don’t care too much about your house or car anyway!

People who retire early have taken the time to “observe the relationship between their happiness and their spending, and they stop wasting their income on things that don’t return much happiness”.8 They also do their best to be “rational with their money, in terms of what it actually does for their quality of life”.9

Money is nothing more than a tool, but it can greatly affect your freedom down the line. Saving 50% of your income is drastic, but it might be worth revisiting your priorities if doing so means you can retire so much earlier.

At the very least, saving a higher proportion of your income is very much worth considering if you prioritize working less and retiring earlier over living a fancier life. It’s a big ordeal to shift the tectonic plates that comprise your finances, but it just might be worth it.

Personally, count me in with the early retirement crowd.