Takeaway: By working less—like by working fewer hours during the week, and by scheduling less time for your important work—you do two things at once: you expend more energy over a shorter period of time to get the work done, and you prevent your work from expanding to fit how much time you have available for it.

Over the next couple weeks, I’ll be adapting a few of my favorite ideas from The Productivity Project and posting about them on ALOP! Don’t worry if you’re in the middle of reading the book—they won’t spoil much, and I’ve taken out a few of the weird stories, interviews, and anecdotes :-) Enjoy! —Chris 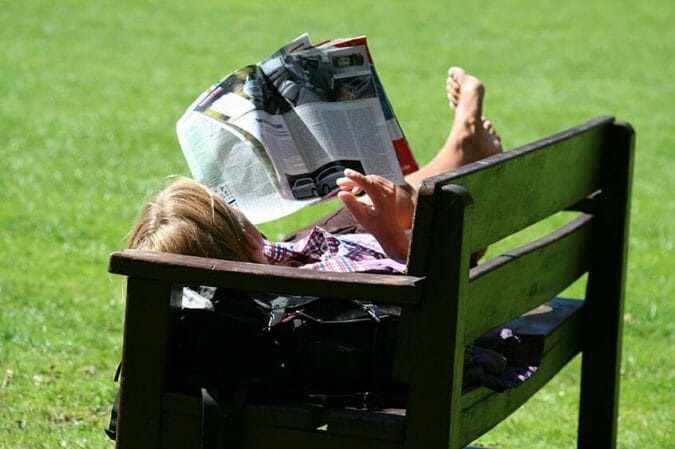 Imagine it’s Monday morning and your phone rings. It’s Jim, who runs your work’s annual fundraising raffle. He’s calling to say that you won! You’ll be going on an all expenses paid trip to Australia!

The only thing is, your flight leaves Wednesday morning—just two days from now.

While things might be tight, my bet is you’d find a way to cram your week’s work into the next two days—and find some time for packing in there, too.

“Parkinson’s Law,” a term coined by C. Northcote Parkinson, states that “work expands so as to fill the time available for its completion.” When we have lots on our plate, we usually find more hours in the day to accomplish it all. Regardless of how much work we have to do—within reason, of course—we usually feel busy and like we’re working at our limit. Yet when something important comes along, we find the time for that, too. The same holds true at home: while we may feel busy most nights, as soon as the new season of House of Cards (or insert your TV show of choice) drops, we somehow find the time to cram 11 hours of Netflix into one week. We have more time than we think—we just spend a lot of it on tasks that don’t need it.

This is why working less is a surprisingly good way of becoming more productive.

Say you have an urgent report due a few days from now. Let’s say that, instead of working on the report for several hours throughout the day—in between bouts of email, meetings, and the minutia of daily work—you scheduled just 90 minutes of concentrated attention to work on it in the afternoon. During that time it would feel as though a fire had been lit underneath you. Like with the surprise trip, you would expend more energy over a shorter period of time in order to get that work done.

By shrinking how long you work on the report for, you hit two birds with one stone:

The most productive people don’t only manage their time well—they also manage their energy and attention well. Shrinking how long we work on a task for is a simple, yet surprisingly helpful way to dedicate more energy and focus to a task—instead of just more time.

Believe it or not, this same idea has been shown to hold true with working fewer hours in general. Working long hours will make us more productive in the short-run, but studies on the optimal number of weekly work hours shows this is not the best method. There’s no denying that crunch mode works: when we have huge, fast-approaching deadlines, it is often necessary to work crazy hours to get everything done.

In the long run, though, working insane hours can obliterate our productivity.

If we worked 15 hours a week, regardless of how much energy we brought to our work, we probably wouldn’t get everything done. But there is also an upper limit—where we simply spend too much time being busy, and don’t manage our energy wisely. During my productivity project, I conducted an experiment to work 90-hour weeks for one month—alternating between working 90 hours one week, and 20 hours the next—to observe the impact on my productivity. Astonishingly, I accomplished only a bit more working 90 hours than I did working 20. I felt more productive because I was busier, but I surprisingly accomplished about the same. In the long weeks, my work expanded, and I didn’t use my energy wisely.

So where’s the sweet spot, between 15 and 90 hours? Research suggests that the optimal number of work hours every week is lower than we might think: 35 to 40 hours. This may seem low, until we look beyond how much time we spend on our work, to how much energy and focus we invest in it. Shrinking how long we’ll work each week prevents tasks from expanding out of control while allowing us to invest as much energy as possible into it. This also prevents burn out, by giving us time to recharge. After 35-40 hours of work, marginal productivity has been shown to drop, until “at approximately eight 60-hour weeks, the total work done is the same as what would have been done in eight 40-hour weeks.”1 Another study found that our productivity “falls off a cliff after 55 hours—so much so that someone who puts in 70 hours produces nothing more with those extra 15 hours.”2

On the surface, working less sounds like a terrible way to become more productive. But for individual tasks and for our work in general, shrinking how much time we spend on our work lets us invest more energy into our work instead. This creates urgency around what we’re working on, and prevents it from ballooning out of control.

It’s counterintuitive advice, but it works.