Takeaway: Principles, by Ray Dalio, guides you through the precise principles that billionaire Ray Dalio used to create the largest hedge fund in the world. I highly recommend this book—because of how introspective, straightforward, and helpful it is. A few nuggets that stuck with me: that we should consider the second and third-order consequences of the decisions we make; that pain is a sign we’re onto something; that traditional success isn’t always worth chasing; that we should mind our intellectual blind spots; and the reason why relationships are more important than money. 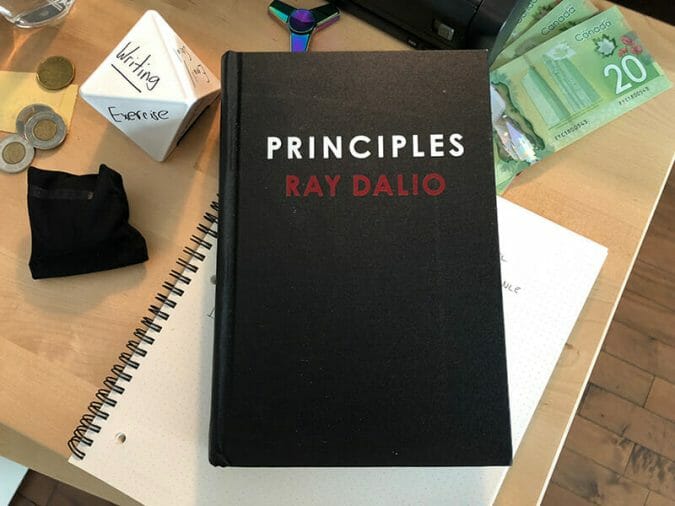 Principles, by Ray Dalio, is a great book, and one I highly recommend. In it, the billionaire investor and entrepreneur behind investment firm, Bridgewater, guides readers through the principles that have defined his personal and professional life. I’m not usually a fan of books like this: successful people are often too eager to spout advice on how you should live your life—while that blinding success hides their problems from view. As Dalio puts it: “Anyone you see succeeding is only succeeding at things you’re paying attention to.” They’re probably “also failing at lots of other things.”

Instead of spouting advice, Dalio dissects his success in order to both better understand it, and further build on it. In the book, he connects his success to the principles he’s developed over time, and talks about how you should act, but also why you should behave that way. The results speak for themselves: Dalio is worth an estimated $17 billion, and Bridgewater is the largest hedge fund in the world. Most of the principles in the book were hatched by solving persistent problems. As he puts it: “I have found it helpful to think of my life as if it were a game in which each problem I face is a puzzle I need to solve. By solving the puzzle, I get a gem in the form of a principle that helps me avoid the same sort of problem in the future.”

Because I made so many notes while reading (125, to be exact), I wanted to share a few ideas that really stuck with me. I hope you can use this article as a jumping off point to pick up the book—you’re bound to uncover insights that’ll change how you live and work.

To give you a flavor of what you’ll find inside, here are five of my favorite ideas.

1. Consider the second- and third-order consequences of your decisions

As Dalio puts it, “Don’t overweight first-order consequences relative to second- and third-order ones.” He elaborates later in the book: “Failing to consider second- and third-order consequences is the cause of a lot of painfully bad decisions, and it is especially deadly when the first inferior option confirms your own biases. Never seize on the first available option, no matter how good it seems, before you’ve asked questions and explored.”

2. Pain is a sign that you’re onto something interesting

We resist pain and discomfort. But pain is also, as Dalio puts is, our “guide to quality reflection.” We should “go to the pain rather than avoid it.” It’ll lead us to a lesson we can learn.
A few more quotes on this idea:

“Instead of feeling frustrated or overwhelmed, I saw pain as nature’s reminder that there is something important for me to learn.”
“The most valuable habit I’ve acquired is using pain to trigger quality reflections.”
“Everyone makes mistakes. The main difference is that successful people learn from them and unsuccessful people don’t.”

There is no single right way to live, and success means something different to everyone. Savoring a simple life can be so much more fruitful than underappreciating an extravagant one. As Dalio puts it:

Having spent time with some of the richest, most powerful, most admired people in the world, as well as some of the poorest, most disadvantaged people in the most obscure corners of the globe, I can assure you that, beyond a basic level, there is no correlation between happiness levels and conventional markers of success.

As Dalio puts it: “The two biggest barriers to good decision making are your ego and your blind spots.”

Your ego is worth taming (I find meditation helps), and noticing your blind spots is just as important. Dalio suggests you “take some time to record the circumstances in which you’ve consistently made bad decisions because you failed to see what others saw.”

Everyone has weaknesses and they are generally revealed in the patterns of mistakes they make. The fastest path to success starts with knowing what your weaknesses are and staring hard at them. Start by writing down your mistakes and connecting the dots between them. Then write down your “one big challenge,” the weakness that stands the most in the way of your getting what you want. Everyone has at least one big challenge. You may in fact have several, but don’t go beyond your “big three.” The first step to tackling these impediments is getting them out into the open.

5. Relationships are more important than money

A lot of people talk about the importance of relationships over money, but I like the way Dalio has reasoned through this:

—
There are so many more valuable nuggets in Principles, but these are the ones that stuck out the most for me. They’ve already changed how I live and work.

You’re bound to discover a lot in this book as well. I highly recommend it.